About Us » School History

Leo Marcell Elementary School was named in honor of Mr. Leo Marcell who served Mission CISD as its business manager for twenty-six years, from 1929 to 1955. He was a remarkable man who oversaw one of the largest periods of growth in the long history of the district. During the period of growth in the district through the 1950s, school officials decided to honor not famous individuals, but those who had served the district with loyalty and integrity. Leo was honored in 1953, when the district announced that the new elementary school on the west side of the city would be named for him: Marcell Elementary School. He retired from the school district in 1955, but continued to serve mission as City Secretary until his health failed. He died August 26, 1966 and is buried in Laurel Hill Cementary, a few blocks from the school named for him.

The school is located at the corner of 10th Street and Holland Avenue. It was built in 1953 when Mr. J. Mil Auld was Superintendent of Schools. When Marcell School first opened its doors on December 1953, it had only fifteen classrooms serving grades one through sixth. There were fourteen teachers and approximately two-hundred and seventy-five students were enrolled at the time. Mr. C. Virgil Ballard headed the school as its first principal and remained with the school for one and half years. Through the years, Marcell has continued to grow steadily in student population. Currently, the school enrollment is approximately 500 students and expanded to twenty-five classrooms, a Learning Resources Center, a cafeteria, school office, special education, music, and technology staff members. 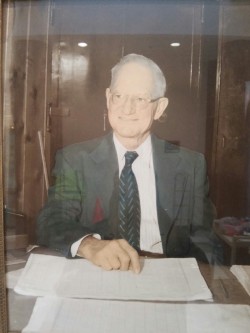